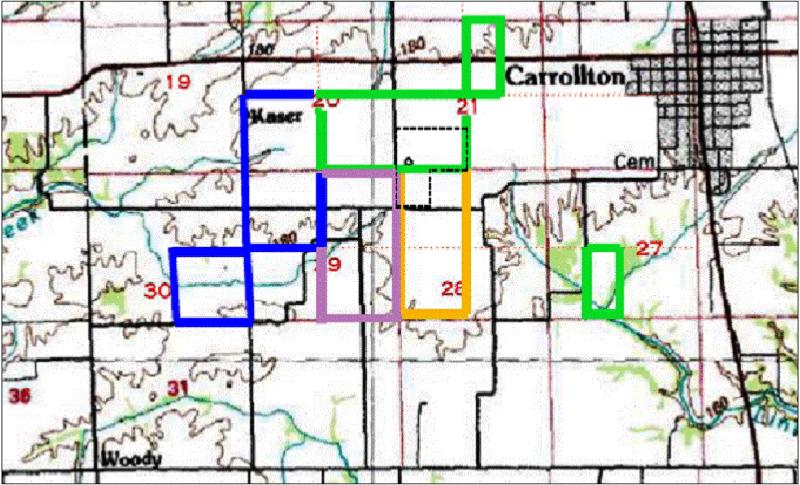 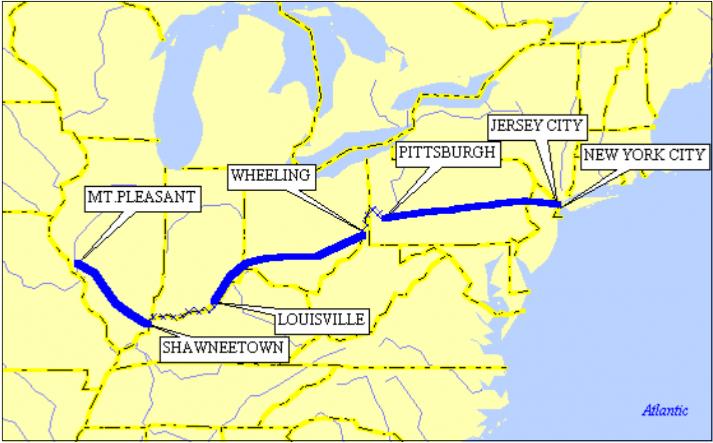 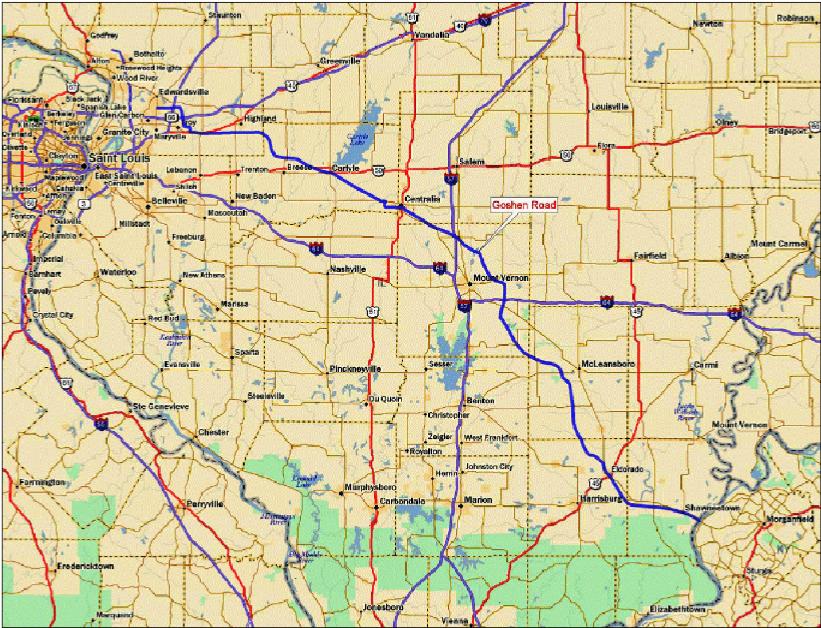 "The artillery of heaven welcoming us to the land of liberty"

James Hobson of Cumberland County in northern England, became greatly interested, while yet a boy, in the progress of the American colonies, and their struggle for liberty. He read very closely the events of the Revolutionary War and his sympathies with the cause of the colonists finally put him in the notion of coming to this country. Eventually, he would persuade 22 family members and friends to immigrate to America. Among them was his sister, Margaret, the widow of William Black.


Youngest brother Robert Hobson came to America ahead of the rest of the family in late 1820 to obtain land grants in the names of his brothers James and William as well as sister Margaret and himself.


The land sale of January 1821, at Edwardsville was one of the most important events of those days.  Before the sale, the purchasers had made an agreement between themselves that they would not bid for the land previously selected by another. By this means, all collision was usually avoided and the settlers obtained the land at the lowest possible government price. The 1800 Public Land Law provided for credit sales of land. Twenty percent was due at the time of purchase, then one-fourth within 40 days, then one-fourth within two years and the remainder in the 3rd and 4th years. By an act of Congress of April 24, 1820 the credit system was abolished and a new cash system established. After July 1, 1820 purchasers were required to pay the full price for their land at the time of sale. The same legislation also reduced the minimum purchase to eighty acres and the minimum price per acre to $1.25. 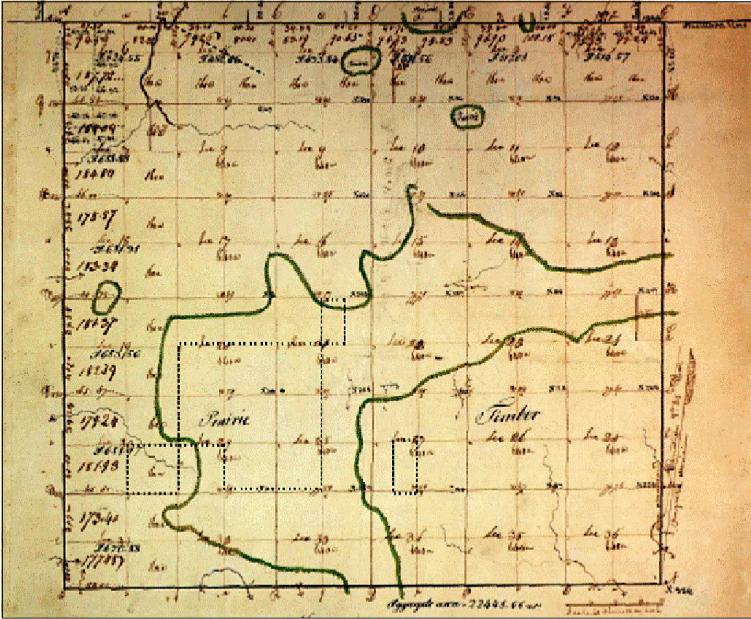 This Carrollton Township 1843 Survey Map shows the areas of timber and prairie grass as of that period. It's obvious why Robert Hobson selected these tracts for his family. All but 240 acres of the total 1760 acres (2.75 miles) was located on prairie land. The Black Homestead house sits on the SW corner of Section 21. The black dotted lines indicate the joint Black-Hobson family land.

On January 6th, 10th, 11th and February 8th 1821, Robert Hobson obtained the following lands from the US Government land office in Edwardsville, IL: 480 acres for James Hobson; 480 acres for William Hobson; 480 acres for Margaret Black and 320 acres for himself. The family bought a total of 1760 acres or about 2.75 square miles in an area west and southwest of what would later become Carrollton in Greene County, Illinois. Most of the land was native prairie with some parcels containing woodlands.  Family records do not indicate how the Hobsons or Blacks paid for the land.

As soon as the organization of Greene County was initiated in 1821, quick-witted landowners began to lay plans for securing a county seat on or near their property. Robert Hobson and John Evans were both interested in a site that would become Mount Pleasant. This location was only one-half mile from the current location of the Margaret Black Farmstead and very close to the other land purchased by Robert, James and William Hobson. From an article printed in the Carrollton Press in 1860, "Mount Pleasant was located on a beautiful mound in the midst of as fine a country as ever occupied a place on the map of the globe, in the prairie, just where a cool, shady grove or point of timber had found its way up the east side, nearly to its summit. From this elevated spot the eye delighted to range over the surrounding prairie to the north, the west, and the south, where the sides of the mound sloped gracefully down to the horizon, or to the dark groves of tall trees waving in the soft breeze."


Robert Hobson, who paid John Evans $50 to not bid on the property, acquired the property without an opposing bid and immediately marked out a town on the spot. He erected a dwelling and store house, opened a stock of goods suitable to the demands of the country, offered inducements to others to make their homes in the new town and in general manifested a commendable degree of energy, enterprise and business talent. Robert had registered a number of these lots in Margaret's name as well as in his own.


In anticipation of the arrival of his family the following year, Robert Hobson had several log cabins built in Section 28 of Carrollton Township at a location about 1/2 mile to the southeast of the later built Homestead house. The location was directly south of the mound called Mount Pleasant.

Robert Hobson expected Mount Pleasant to become the county seat of Greene County. He did not, however, take into consideration the anti-English sentiment following the War of 1812. When the vote was taken in 1821, only one person voted for Mount Pleasant since it had been laid out by "English" people. The site laid out by Thomas Carlin, a War of 1812 veteran, that later became Carrollton on February 20, 1821 was selected as the county seat.


Thomas Black recalled the journey to America in his 1891 autobiography:
"We had a long and tedious voyage of forty-seven days across the Atlantic. When we first left
Liverpool, we got aboard an old vessel called the 'Niagara,' which proved unseaworthy and was
wrecked ten or fifteen miles out from port. We were then obliged to go back to Liverpool and get
another vessel, a brig called 'Yamacraw,' of which Captain Bates, a very good man from New York,
was master. In crossing the Atlantic we children had a good time, but with the old folks it was not
so agreeable, my mother and aunt being sick during most of the long voyage. The night we reached
New York (on July 22, 1822), a very heavy thunder storm came up, which my uncle said was the
artillery of heaven welcoming us to the land of liberty. He thought there was no such country for
freedom and liberty as the United States."

Continuing with Thomas Black's 1891 autobiography:
"The yellow fever was prevalent in New Your at the time, and we were obliged to go over to what
was then called Pole's Hook, now Jersey City. We were detained there some time buying horses and
wagons for the journey to the west. We were unfortunate at the very outset in buying a pair of
horses that were afterwards claimed by another man, which, was no doubt a put up job between two
men to cheat my mother out of a hundred dollars. Consequently, she had a law suit on her hands the
first thing after we landed, a somewhat discouraging initiation into a new country for a widow with a
family of five children. The result of the suit was that my mother had to lose $50 and the man who
sold the horse the same amount."

"We had to buy two more horses and with them we made the trip to Pittsburgh. This was found to
be rather a slow way of traveling, and it was finally decided to buy a flatboat and go down the Ohio
River to Shawneetown, Illinois. The flat boat was purchased and we started with it, but by the time
we got to Wheeling, Virginia, having been seven days in going ninety miles, it was quite apparent that
traveling by water was slower even than by land. So the boat was sold, and we again started across
the country in wagons. At Louisville, KY, John Armstrong left us and took a young man named Steel
to Berdbeck's settlement in Indiana - afterward called New Harmony, if I am not mistaken - and
the family came down to Shawneetown on a steamboat. Armstrong met us there and again taking to
our wagons."

From Shawneetown, they traveled northwest through Illinois over land on "Goshen Road." Linking Shawneetown to the small town of Goshen near Edwardsville, IL,  Goshen Road ran along an old Indian trail that followed the ridge tops and meandered to cross creeks and rivers. Most of the actual route is not part of the road system today.

After six and a half months of traveling, the exhausted group of immigrants finally arrived at their new land in Greene County, IL on December 22, 1822.

Goshen Road is shown in blue.